The Ellen Browne Caregiver of the Year award is given annually in November during National Caregiver Month. 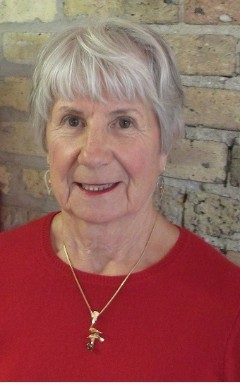 The Ellen Browne Caregiver of the Year Award was created in 2016 with the receipt of a generous gift from Ben and Rebecca Gerber. Ben was a past president of Argentium Care's Board of Directors. The award honors an exceptional Argentium Home Care employee home care aide and is named for the late Ellen Browne of Evanston.

Ellen Browne had been a volunteer with Argentium for over a decade serving on the Board of Directors and as Board President. She also chaired multiple committees including the planning for one of the most successful fundraisers in Argentium’s history. In addition to her service to Argentium Care, Ms. Browne had also served as volunteer and/or member to:

“Her considerable energies combined with her professional experience and knowledge gave Ellen the ability to observe, analyze and act—and this served Argentium Care well,” said Jeanie Ramsey, Executive Director in 2016, when the award was created. “She had always been a champion for our caregivers. Demanding the best of them and for them—that they be well trained, fairly paid, respected professionals. It is right this award be in her honor.”

Speaking about why he and his wife wanted to honor Ellen, Ben Gerber, who Ellen had recruited to serve on Argentium’s Board of Directors in 2013, testified “Ellen had been a strong and unwavering supporter of Argentium for many years. Her commitment to serving seniors had a tremendous influence – not only on the fabric of the organization itself – but upon us as individuals. Ellen herself described Argentium's philosophy of care as being one where all older adults deserve respect, regardless of age or physical limitation.” Ben adds that “Ellen was proud that this philosophy is instilled in Argentium Care's employee caregivers.”

Jeanie echoes Ben’s thoughts “important as Ellen’s service as a model volunteer and leader for Argentium was, her being a role model for resilient aging was equally important. Ellen demonstrated the best of aging—the side that media frequently ignores. We are thrilled to be able to honor Ellen in such a fitting way.”